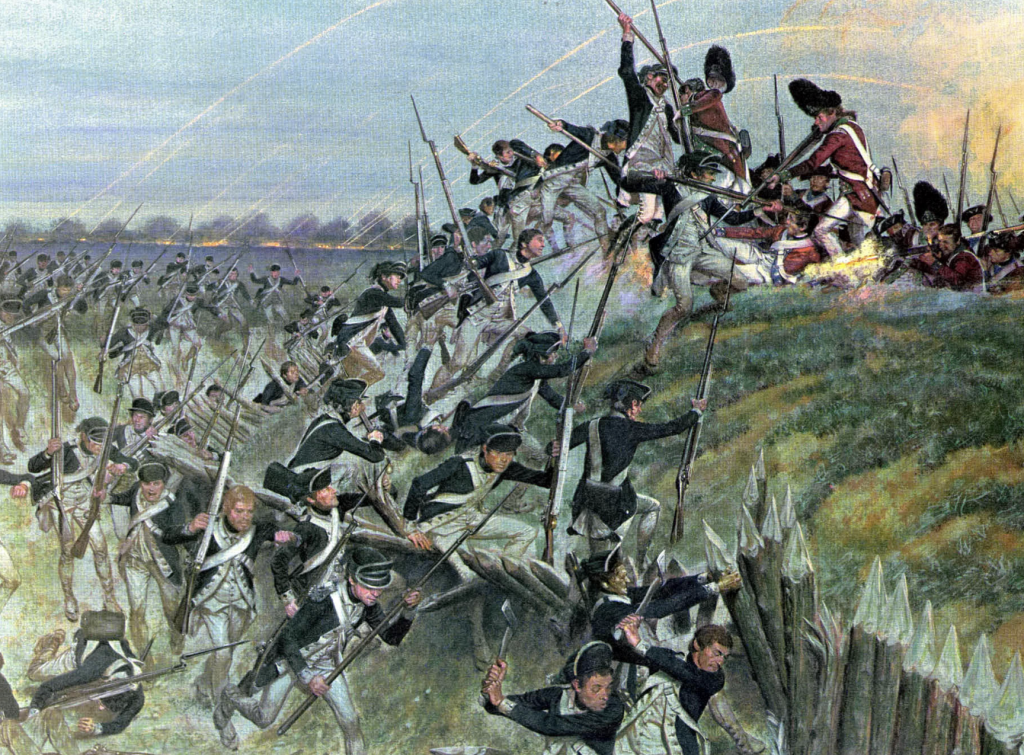 Most Americans know Alexander Hamilton as the country’s first Secretary of the Treasury and the man who reformed the country’s finances. Some may be aware that Hamilton worked with Madison to help write clauses in the Constitution and the Bill of Rights.

Right after the war broke out, Hamilton formed the 1st Provincial New York Company of Artillery in 1776 which was a battery of four cannon. Elected its captain, Hamilton drilled the men so they could unlimber the cannon and get them into action quickly.

The battery took part in the September 16th, 1776, Battle of Harlem Heights and then on October 28th, 1776, Hamilton’s battery performed well during the Battle of White Plains by helping cover the Continental Army’s retreat from what was a tactical draw.

Captain Hamilton’s battery made the trek to the winter camp at Valley Forge and on the night of December 24th, it was ferried across the Delaware River. Hamilton positioned the battery so it could fire on the German soldiers as they tried to form in ranks. His guns rapid and accurate fire killed many German cannoneers and prevented them from firing on the attacking Continental Army soldiers.

Just a week later, at the Battle of Princeton, Hamilton’s battery was again in action. Even though the American’s retreated in the beginning of the fight, General Washington rallied the Continental Army that pushed the British Army back. A contingent of retreating British soldiers took shelter in a building known as Nassau Hall. On his own, Hamilton moved his battery so it could fire on the building. Shortly, 194 British soldiers surrendered.

Hamilton’s ability was recognized by many Continental Army generals who wanted him on their staff. He turned them all down saying he’d prefer to be with his battery. However, when Washington asked him to be his aide-de-camp and chief of staff, Hamilton could not turn his commander down. Promoted to lieutenant colonel, he served in this role with distinction for four years.

Still, Hamilton wanted to command troops or artillery in the field. Washington refused Hamilton’s many requests saying he was needed on his staff. Finally, a frustrated Hamilton handed Washington his letter of resignation saying he would withdraw it if he was given a field command.

Washington gave in and just before Yorktown, Hamilton took command of regimental sized force of three battalions of light infantry drawn from the 1st and 2nd New York regiments. His task, take the British Army’s Redoubt 10 at the same time the French army attacked Redoubt 9. If the combined Continental/French armies succeeded, the British Army’s defensive perimeter at Yorktown would be breached and Cornwallis would have no choice but to surrender.

Hamilton insisted on a night attack to surprise the British and minimize casualties. He led the first wave which captured Redoubt 10 in hand-to-hand fighting while the French took Redoubt 9 during the night of October 14, 1781. Three days later, Cornwallis surrendered.

Alexander Hamilton traits as an effective combat leader and an outstanding staff officer stood him well during the years while the country was still trying to find its footing. Unfortunately, Aaron Burr killed Hamilton in a duel after Hamilton fired his pistol in the air. Burr was supposed to do the same but decided to eliminate a political rival who might have beaten Jefferson who was planning on running for a second term. Besides killing Hamilton, Burr also killed the Federalist Party which never recovered from Hamilton’s death and loss of his vision and leadership.

Painting is H. Charles McBarron’s painting of the assault on Redoubt 1o courtesy of the Chief of the U.S. Army Historian’s office.

Posted in Army, Blog and tagged Taking of Redoubt 10