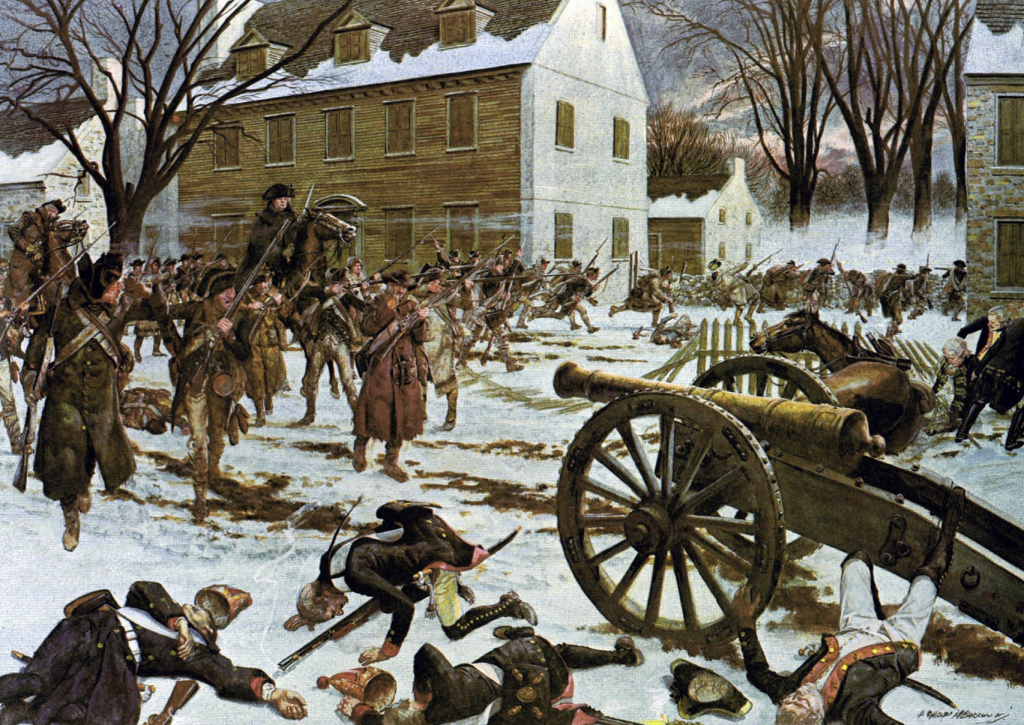 Two years into the war, the British government in London and the British Army in the Thirteen Colonies were confident that, eventually, they would defeat the Continental Army and end the rebellion. Or the citizens would tire of trying to defeat what was then the most powerful country in the world and reaffirm their allegiance to the crown. The Colonials, as the Brits called them, American historians prefer Patriots, needed a decisive victory.

What follows are eight tidbits about the battle and the days that followed that are not in most history books.

Tidbit 1 – Washington had much better intelligence than the British. Spies gave him an accurate description of British Army and Germans deployments in New Jersey. One spy – John Honeyman – had become a “trusted source” to Colonel Rall, the commander of the German troops.

Tidbit 2 – Colonel Rall realized his position would be difficult to defend and asked for reinforcements which were refused. Loyalists warned Rall that Washington was planning an attack, and he ignored the intelligence and declined to build defensive positions. Nor did he order outposts to. be set-up along the primary avenues of attack to provide warning.

Tidbit 3 – The Germans were not drunk; they were caught unprepared and totally surprised.

Tidbit 4 – While most Americans use the word “Hessians” to denote the German mercenaries, they came from seven principalities – Anhalt-Zerbst, Ansbach-Bayreuth, Brunswick-Wolfenbüttel, Hannover, Hesse-Kassel, Hesse-Hanau, and Waldeck. Rall commanded three regiments from Hesse-Kassel.

Tidbit 5 – Washington planned two crossings, one north and one south of Trenton. Only the northern force made it and instead of attacking around dawn, the Continental Army arrived around four in the afternoon with roughly 2,400 troops instead of the 5,400 he had hoped to bring to the battle.

Tidbit 6 – While almost 900 Germans were captured, the real booty was the captured stores of desperately needed food, clothing, and ammunition.

Tidbit 8 – The victory at Trenton led to two more Continental Army victories in quick succession. First, at the Battle of Assunpink Creek on January 2nd, 1777, the Continental Army held off the British and killed or wounded close to 600 at a loss of less than 100. Then, on January 3rd, Washington decisively defeated Cornwallis at the Battle of Princeton, killing or wounding 150+ British soldiers and capturing over 200.

Nonetheless, it would take until March 1781 before the British came to their senses and began negotiating an end to the war. The last land battle of the American Revolution was fought at Cedar Bridge Tavern in southern New Jersey on December 27th, 1782, six years and two days after the Battle of Trenton.

Painting is the Hugh Charles McBarron depiction of the Battle of Trenton, courtesy of the U.S. Army Center for Military History.